This public art infographic / data visualisation explores the changing population demographic of the suburb of Woodstock in Cape Town, from 1865 to 2001. Created as Black hat and Nimbus with Mark Henning.

Scroll down for a detailed description of the artwork and the history of Woodstock. 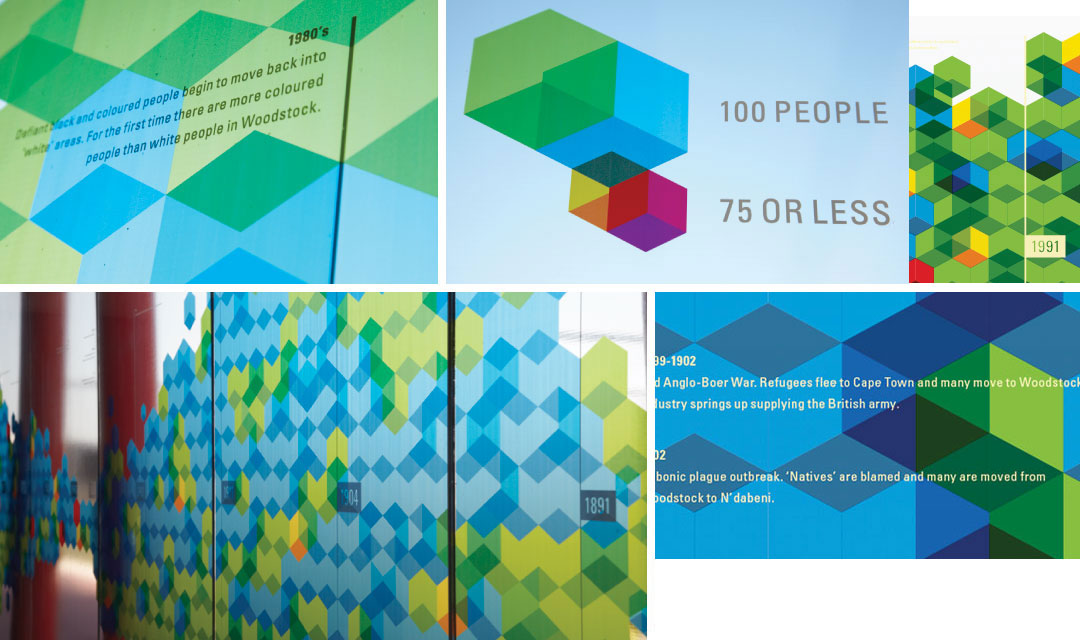 Our objective for each of these artworks was to create an aesthetically pleasing image or pattern from information related to the area immediately surrounding each station. Woodstock as an area has a variety of aspects that could be explored and visualised, but after some consideration we realised that what makes this suburb so unique and interesting is its people. It remained a racially mixed area during apartheid and has been influenced by a wide variety of cultures.

We decided that creating a visualisation of how the population has changed over time would be an interesting challenge – telling a social story using a visual communication. Visually we were inspired by Chad Hagen’s nonsense infographics – although they did not actually display any data, we thought it would be an interesting challenge to create something using the concept, but with real data.

After exploring the census data we found that the most consistant way to track the changing socio-cultural mix was race, as this was the only demographic that was consistently captured in 136 years of census data that can be related to culture. This presented some challenges as a variety of different classification systems have been used in different census reports – from the British colonial era, through apartheid, to today. However, as the graphic is intended to show broad trends rather than specific detail, we were able to consolidate the information in a manner that was accurate enough to use.

The graphic’s shape is entirely determined by the data and from a distance creates a striking visual, reminiscent of the movement of a swarm of insects or a shoal of fish. Closer inspection reveals greater detail and historical events that influenced the population have been noted in order to contextualise the data.

As it is located in the entrance corridor of the station, it is designed to be viewed as commuters move past it, creating a linear story. The isometric overlapping blocks create an illusion of three dimensional depth and add to the aesthetic impact of the bright colours.

The History of Woodstock

When we had collected all of the data (you wouldn’t believe how surprisingly difficult this was) and composed the first rough visual, we were surprised to find that it didn’t look the way we expected it to at all. Instead of starting off with a small population and growing fairly evenly to today’s population, there is a massive hump in the middle, around 1904. As a few people have asked about it, below is a more detailed summary of 136 years of historical events that influenced the development of the Woodstock we know today.

The original inhabitants of the area were the Khoe, who’s population went into decline after the arrival of the Dutch in 1652, who not only fought with them over land, but also brought European diseases like smallpox to which the local Khoe had little immunity. Those that remained were slowly absorbed into the Cape community that, particularly due to the introduction of slaves, became increasingly diverse. Slaves were brought from Angola, Guinea, Mozambique, Madagascar, Indonesia, Burma, India and surrounds.

Although originally most of the European population was Dutch many British arrived after they occupied the Cape to stop the French having access to this strategic point during the Napoleonic wars. The Dutch officially surrendered to them in Woodstock – the “Treaty Tree” outside the house where they signed the treaty in 1806 still stands in Spring Street, and is a national monument, being over 500 years old, I guess it’s seen a lot. It used to be called the “Old Slave Tree” where slaves were sold and hanged.

Starting out as farm called Papendorp, Woodstock officially got its name in 1867. It had become a popular family seaside resort and was known for a brief time as New Brighton, but to a large extent it was cut off from town itself and isolated. This all changed in 1859 when the first railway in South Africa passed through Woodstock. This ease of access, combined with the growing demand for manufactured goods by the occupying British army, caused light industry to spring up in the area and an influx of artisans and workers. The first glass manufactured in South Africa was made in Woodstock in 1879.

Although it was still mostly a seaside resort in the early 1880’s with a growing working class population, the population increased steeply in the following years. A major factor in the rapid population increase may be the influx of Eastern European Jews fleeing the pogroms in Tsarist Russia, Lithuania, Latvia and Poland. Between 1880 and 1910 about 40000 Jewish immigrants entered the country as refugees and many of them settled in Woodstock. In 1899 the tramway was extended to run through Woodstock, further improving its accessibility and industry and creating more jobs in the area.

Another factor in the population increase was the First and Second Anglo-Boer Wars (1880-1881 and 1889-1902). There was a massive influx of British troops and the demand for supplies from the British army ensured that industry boomed. And it was not only British but also refugees from the war – many people from various backgrounds fled to the relative safety of Cape Town. Being a working class area with a demand for labour, Woodstock attracted many of these immigrants.

In 1902 there was an outbreak of bubonic plague. “Natives” (ie. black people) were blamed and many were rounded up and sent to a quarantine camp on the outskirts of Cape Town, called N’dabeni. This was essentially the first “township” and, as Woodstock was a very racially mixed suburb, this had an influence on the population. The plague was actually caused by rats imported in horse feed by the British army.

The period after the Anglo-Boer wars was a time of economic depression, with many people having to move to less affluent neighborhoods like Woodstock. One in seven Capetonians was British-born and Woodstock had become a working-class neighborhood with many pubs. In 1908 Woodstock had 20 bottle stores and during the early 1900’s several gangs were active in Woodstock.

After the Anglo Boer wars thousands of British left the Cape and many others left to seek their fortunes in the diamond fields, resulting in a net drop of 7% in Cape Town’s population by 1911. But Woodstock’s population only decreased by 1% possibly due to being as a less affluent (cheaper) area in a time of depression, with many poor inhabitants living in cramped conditions.

Unfortunately the Woodstock data for the 1921 census could not be obtained (believe me, we tried) but the next census in 1936 shows a marked decline in Woodstock’s population. In fact according to the census figures, the population had declined by 97.5% in 25 years. Because the census data for the following years (1946-1960) could also not be obtained (or do not exist as they did not enumerate it separately as a suburb), it could possibly be an erroneous figure, although several factors could have contributed to a rapid population decline, for example the suburb boundaries may have been changed, making the suburb smaller, although we didn’t find any evidence of this.

In 1914 the First World War broke out and 146 000 whites, 83 000 blacks and 2 500 people of mixed race served in the war on the side of the allies for South Africa. It is conceivable that some of these people were from working class Woodstock.

In 1918 Cape Town suffered a great influenza epidemic with 7000 people dying in 3 weeks. In 1919 another flu epidemic, albeit in a milder form, ravaged the city. In the less affluent, overcrowded area of Woodstock the death toll may have been significant.

In 1923 the urban areas act was passed, and although it was never seriously enforced in Woodstock, it may have contributed to many white people moving to newly established ‘white’ areas in the following years (some designed specifically to help gentrify poor whites, particularly after the Carnegie Commission on Poor Whites had concluded in 1931 that nearly one-third of Afrikaners lived as paupers).

In 1927 the Langa township was established, and many non-white people were forcibly removed there. Although there were not large scale forced removals in Woodstock, it is possible that the new restrictive laws and general displacement of non-whites made it more difficult for them to live in Woodstock and contributed to the population decline.

The 1930’s were also a time of economic depression and much of the industry in Woodstock may have taken a knock, resulting in workers leaving to seek jobs elsewhere, such as in Johannesburg.

In response to growing anti-Semitic sentiments among nationalist Afrikaners – usually directed at the mine owners, many of whom were Jewish – the government introduced legislation to prevent the immigration of Jews into South Africa (the Aliens Act [No. 1] of 1937). The same law also prohibited the entry of any immigrant who could not quickly assimilate into the white population. This of course prevented any Jews fleeing Nazi Germany from seeking refuge in South Africa. For Woodstock, once the first port for a variety of refugees, this may have put a serious damper on population growth.

Between 1935 and 1945 many Portuguese Maderians moved into Woodstock, mostly based around the St Agnes Catholic church. They were mostly fishermen, but the next generation moved on to start small business and shops after large commercial fishing operations made it more difficult for small scale fishermen.

After World War 2 there was an influx of poor white Afrikaaners to Woodstock after the bleak years of the war. Many were farmers who had also suffered after a drought in 1946. After the war Woodstock started to become more industrialized with many new factories opening their doors and the population began to increase, although new people moving into the area were mostly white.

In 1952 the Woodstock beach was incorporated into the foreshore scheme – a massive land reclamation scheme and refurbishment of the harbor. Woodstock would never be a seaside resort again. In 1966 nearby District 6 was declared a ‘whites only’ area with forced removals starting in 1968.

In 1976 the only “uncontrolled” (unsegregated) area of Cape Town was Woodstock, and in a rebellious move against the apartheid laws many coloured and black people around the country start moving back into ‘grey’ areas, or areas where the government was unable to enforce segregation. You can see this trend in the population demographics of Woodstock with a 38% increase in the coloured, black and asian population of Woodstock between 1970 and 1980 vs an 8% increase in the white population. This trend continued until the end of apartheid in 1994.

The latest census results (2001) reflect the large scale renovation and gentrification that is happening in Woodstock, many young home owners and investors wanting to develop property at a good price began to buy and restore houses in Woodstock and this has again made it a more desirable neighborhood. The 2001 census shows a very mixed population, and as affluence has increased, population density is decreasing. I’d love to add the latest 2011 census results to this when I have time and maybe even turn it into an interactive visualisation...